The large, wooden panel inscribed with the Law of Moses in Leerdam’s Grote Kerk is a striking example of a ‘Ten Commandments panel’, a common decorative element in Dutch churches after 1572, the year in which the Northern Netherlands rebelled against Spanish rule. This year also marks the switch from Roman Catholicism to Protestantism as the public religion of the young Dutch Republic. In church buildings elements associated with Catholic worship made way for large and richly decorated panels bearing biblical texts, of which the text of the Ten Commandments was by far the most popular. Of the 223 known examples 155 are still to be found in church buildings today. The Ten Commandments panel in Leerdam’s late-medieval church is distinguished by its baroque monumentality, by the presence of the date 1698, and by the coat of arms of the Stadholder William III (1650-1702), Prince of Orange and King of England, Scotland and Ireland, who also bore the title of Count of Leerdam. The customary location for a panel with the Law of Moses is the boundary between choir and nave. It was in the choir that the Lord’s Supper was usually celebrated, the sacrament recalling Christ’s sacrifice in both Roman Catholic and Protestant worship. The panel with the Ten Commandments, usually affixed to the choir screen above the entrance to the choir, refers to the mercy of Christ, who fulfilled the Law through the shedding of His blood. A fine example of this placement in the early Protestant period can be found in Leiden’s Pieterskerk.

The panel in the church in Leerdam was originally located above the western entrance to the nave and formed a unit with the portal. In the eighteenth century it was placed above a new wooden porch in the choir screen, but after this later addition was removed during the most recent restoration of 1957-1960, the panel was relocated to the north transept where it now stands against a blank wall. The lower double door zone has been replaced by oak panelling. The panel’s most distinctive feature is the sculpted, painted and partially gilded coat of arms of William III in the broken, segmental pediment above the classicist framing of the twin tablets of the Law. The shield is flanked by the ornaments of the Order of the Garter, while the plinth bears the monogram W : R (Willem Rex).

There is currently no evidence to suggest that the panel was gifted to the church by William III in his capacity as Count of Leerdam. Nor is the motivation for placing the panel in the church entirely clear. Whereas painted glasses, organs and baptismal and Lord’s Supper utensils decorated with the coat of arms of members of the House of Orange-Nassau are generally considered to be gifts, that is probably not the case for panels inscribed with biblical texts and decorated with the Orange-Nassau coat of arms. It is more likely to have been an act of homage to high authority, in the case of Leerdam a tribute to its count, William III. 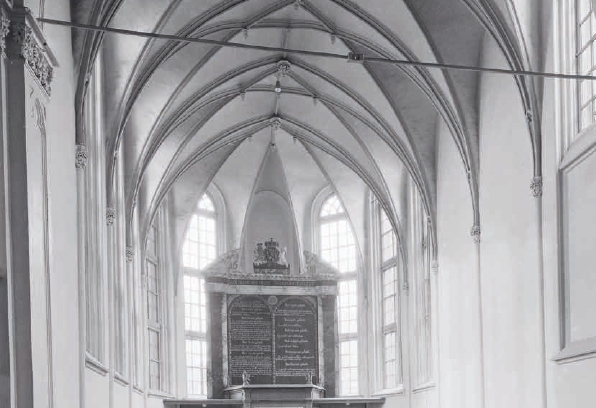