Buildings of historical and artistic value to a great extent derive their cultural-historical value from changes realized through human involvement. A building is subject to wishes and requirements and those may vary for each generation or, in some cases, even disappear altogether. The assignment of conservation consists largely of guidance of such transformation processes. Conservation tries to give new developments in a listed building a place of their own, with minimal damage to the historical character and without putting up too many obstacles.

The Provinciehuis in Groningen consists of an assembly of historical buildings crammed between Martinikerkhof, Kleine Snor, Singelstraat and Sint Jansstraat. Since the early seventeenth century the complex has uninterruptedly been in use as an administrative building for the province of Groningen and has a rich history.

The late medieval Sint Maartens-school is the oldest building. Later additions are a record office from 1880-1881 (architect J. van Lokhorst), a wing dating from 1915-1917 (architect J.A.W. Vrijman) and a caretaker's house also dating from 1915-1917. but executed with a facade from 1559 originating from another part of the city. The complex has two courtyards: one bearing the prosaic name Grote Snor. originally an alley between Singelstraat and Martinikerkhof, and one courtyard in the form of an isosceles triangle. This second courtyard was provided with a transparent roof in 2006. As the buildings on the second courtyard are all on the national monuments and historic buildings register, the Rijksdienst voor Archeologie. Cultuurlandschap en Monumenten (RACM) played an advisory role in the planning preceding the execution.

The RACM could agree to the principle of roofing. The courtyard had not been designed as such but had come into being because buildings had been erected in various periods and at a certain moment an interjacent plot was left. This residual space looked abandoned and was not part of the activity of the Provinciehuis, whereas in the year 2004 there was a need for extra floor area and a representative space. When the courtyard would be covered, these wishes could be fulfilled.

The RACM served the municipality of Groningen, being the licence-issuing authority, with the following range of thought: a roof should not cause any material or constructive damage to the listed buildings; a transparent roof is to be preferred and ought to be subordinate to the historical architecture; as a result of the roof the courtyard will acquire a new and vital role in the official duties of the Provinciehuis; the users would be able to see. appreciate and enjoy the adjoining listed buildings better from the courtyard; roofing undoubtedly contributes to more intensive, improved use. and as a result, to the future value of the listed buildings.

In addition, the RACM formulated several concerns and a few remarks expressing some reserve. Roofing also implies immaterial effects, for the direct contact with the elements is shut out and a totally different perception results, that is to say an indoor climate. This is inevitable, but the original outdoor experience may be called to mind by maintaining characteristic facilities, for instance, in the form of paving, external wall finishing, rainwater pipes, patina and rainwater heads.

One aspect of the plan caused the RACM more serious concerns. The construction and the weight of the roof would to a great extent be borne by the historical buildings. Load-bearing elements of the roofing would perforate the historical roofs and be diverted on the historical, monumental load-bearing structures. Other concerns were adequate rainwater discharge and good facilities in case of snowfall. Since the completion of the roof in 2006 the space is referred to as the atrium and no longer as the second courtyard. The newly formed space accommodates receptions and exhibitions, meetings and expositions. The perception of the space is completely different from what it used to be, but is highly appreciated in daily use. The number of workable square metres has increased.

In spite of the advice of the RACM the roof is not completely self-supporting in character and burdens the historical constructions of the adjacent listed buildings. For this purpose the old roofs have been perforated in several places. Although a stay in the new interior space is regarded as surprising and in some sense cosy, from the public road the glass roof looks like a megalomaniac iceberg rising from the heart of the Provinciehuis and providing the historical silhouettes of slate roofs and brick stair towers with an unprecedented contemporary lineation and massiveness. 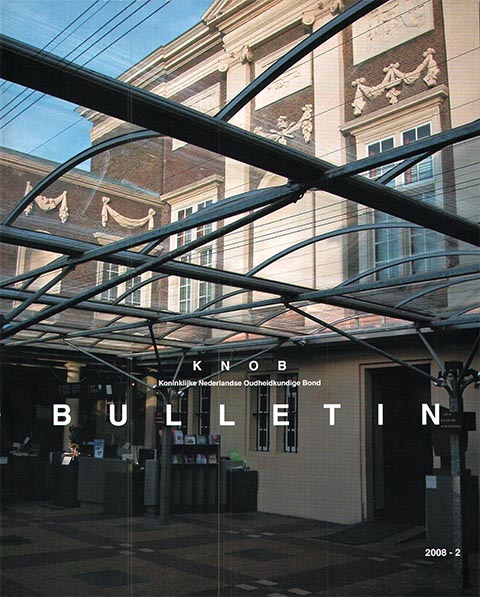